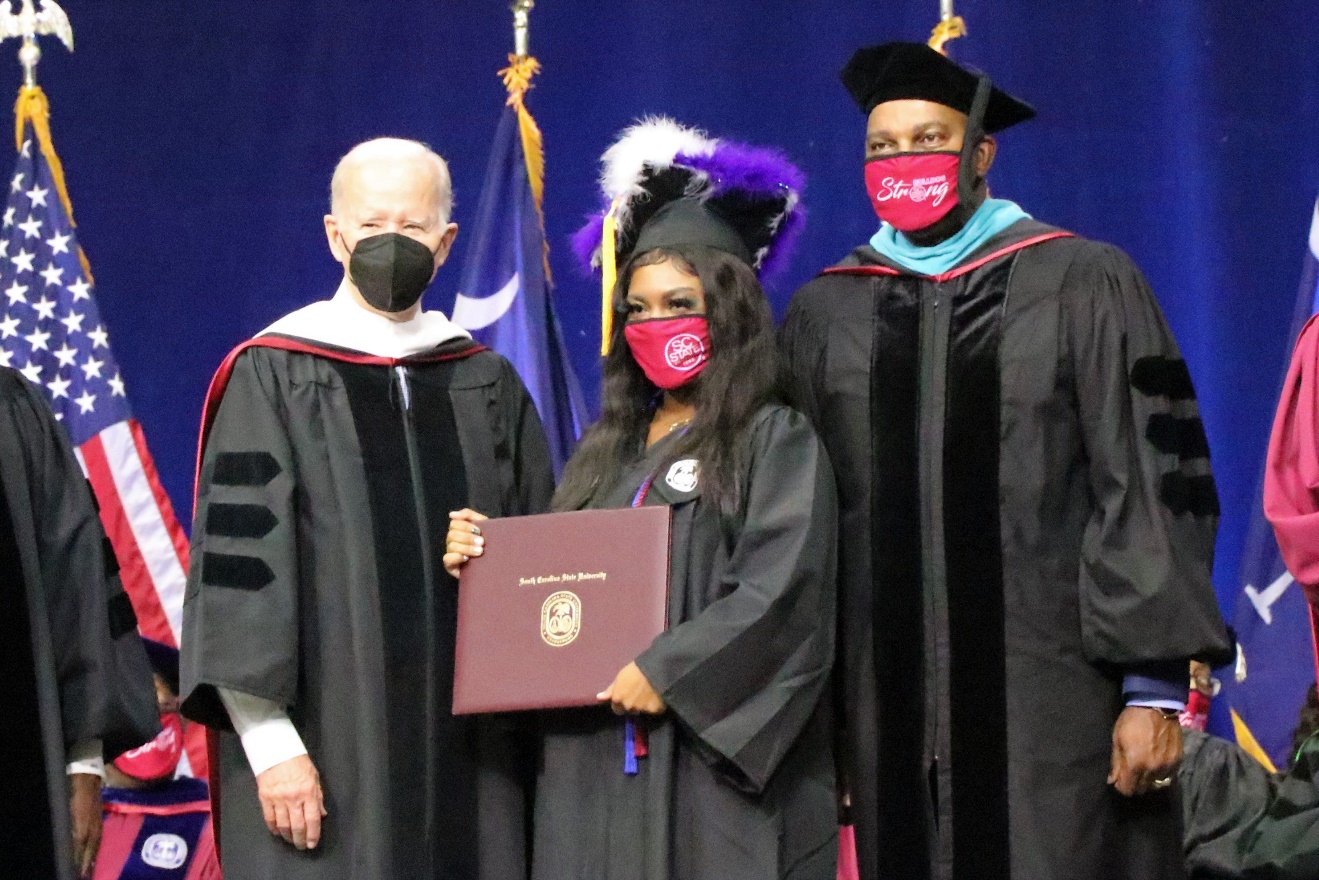 U.S. President Joe Biden and SC State Interim President Alexander Conyers congratulate a student on her graduation from the university on Friday, Dec. 17, 2021.

“You know it’s been a long journey — dealing with the pandemic, doing the classes virtually,” Flint said. “It was an adjustment that I had to get used to, so I had to get that weight off my shoulders, and I’m feeling good.” 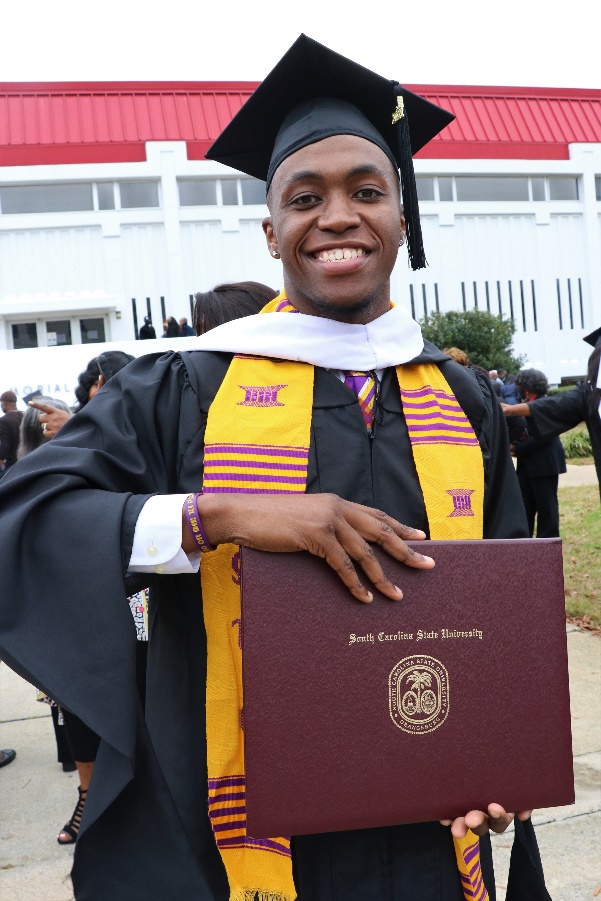 With a goal of working in the sports counseling field, Flint completed his master’s degree in rehabilitation counseling this fall having earned a criminal justice degree from SC State in 2019.

The icing on his master’s degree was the opportunity to stand next to the 46th president of the United States, Joseph R. Biden Jr., as Flint crossed that commencement platform.

“It was great — just seeing him on TV (and) now I’m seeing him in person,” Flint said. “It’s just an unbelievable feeling. He came all that way down here to South Carolina State, so it was good to see that.”

Flint took to heart the message from Biden’s commencement address about rising to the opportunities resting with the Class of 2021.

“You just got to take heed of it and use it in your everyday life,” Flint said. “Using education is No. 1. You have to have focus on what you want to accomplish in life.” 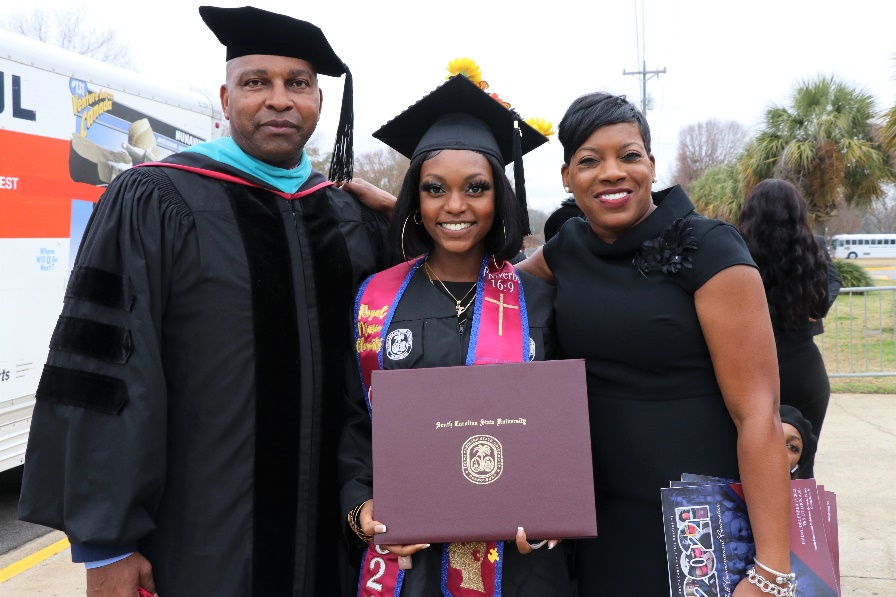 Royal Clemonts, who completed her bachelor’s degree in psychology from SC State, found the experience with Biden to be a bit surreal.
“It was exciting. I couldn’t believe it really,” Clemonts said. “I like how he encouraged us to keep going even further than SC State. We have to keep pushing through life and through everything.”
Clemonts, who has already enrolled in graduate school, is a “legacy grad,” as her mother also earned two degrees from SC State.
“That was exactly why I chose to come here, because she told me all her stories about school, and I just really want to be like her,” Clemonts said. “I got a lot of good experiences. I learned more about networking, believing in myself, how to grow, and just being well-rounded overall.” 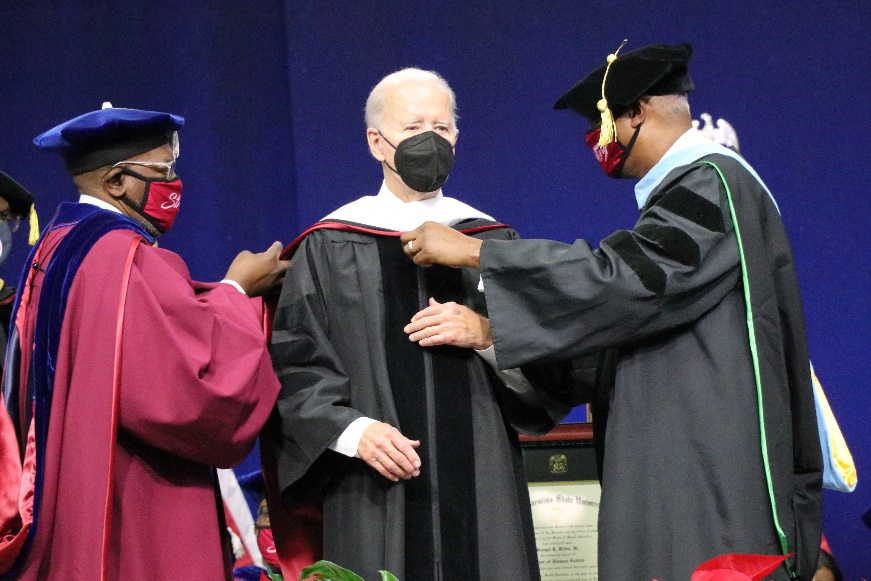 Biden, too, is now a Bulldog alumnus. The university bestowed an honorary Doctor of Humane Letters degree upon the president at the commencement ceremony following his keynote address.

“Your time here has come during a tumultuous and consequential moment in American history,” Biden told the class in his address, noting the COVID-19 pandemic and racial strife that affected the country during the graduates’ time at SC State. “It’s led you to graduate at a real inflection point in history. No graduating class gets to choose the world into which they graduate. Every class enters the history of the nation up to the point that has been written by others.

“But few classes every once in a few generations enter at a point in American history where it actually has a chance to change the trajectory of the country. And that’s not hyperbole. You face that inflection point today, and I am confident that you will meet the moment.” Biden said. “You’re ready because you are part of a proud and sacred tradition, an HBCU tradition.” 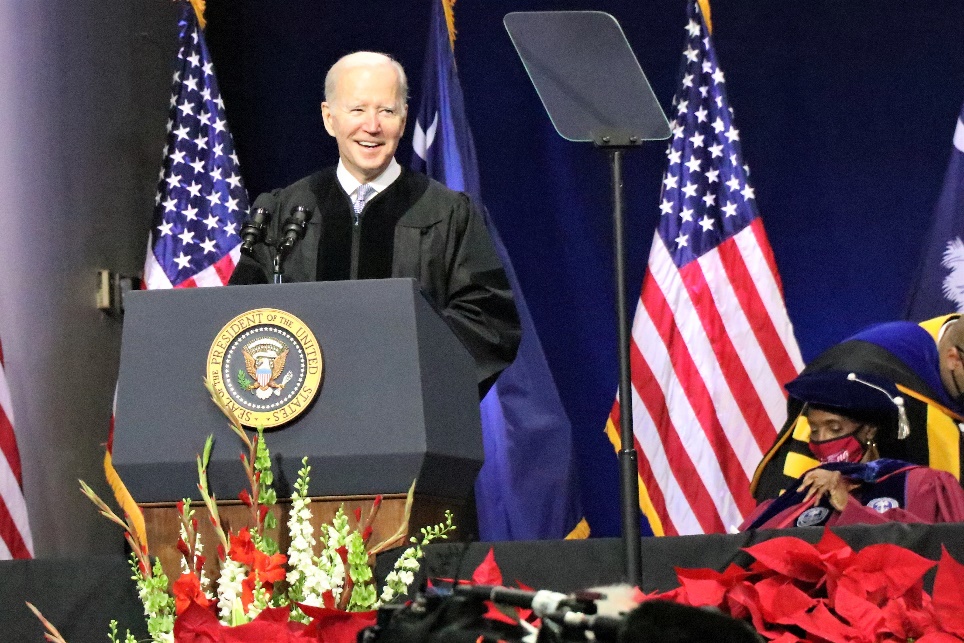 “Graduates, I’m here to congratulate you but to also let you know that your country … is counting on you,” Biden said. “We’re counting on you to change, to turn the dial at a moment we have a chance to do it.”

He later added, “You’re part of one of the most gifted, tolerant, talented and the single best educated generation in American history, and with that comes a hell of an obligation.”

Biden’s address also focused on his administration’s commitment to more funding for Black and low-income families to matriculate through higher education, as well as money for HBCUs to create and expand programs in such areas as cybersecurity, engineering, higher education and health care.

He challenged the Class of 2021 to continue the fight against resurgent racism and hate in America, as well as what he called an assault on voting rights not seen since The Reconstruction.

“You can defeat it, but you can’t eliminate it,” Biden said. “It just slides back under a rock, and when given oxygen by political leaders, it comes out ugly and (as) mean as it was before. We can’t give it any oxygen. We have to step on it. We cannot — we must not give hate any safe harbor. We have to shine as bright a light on it as we can. That’s the ultimate disinfectant. Call it out. 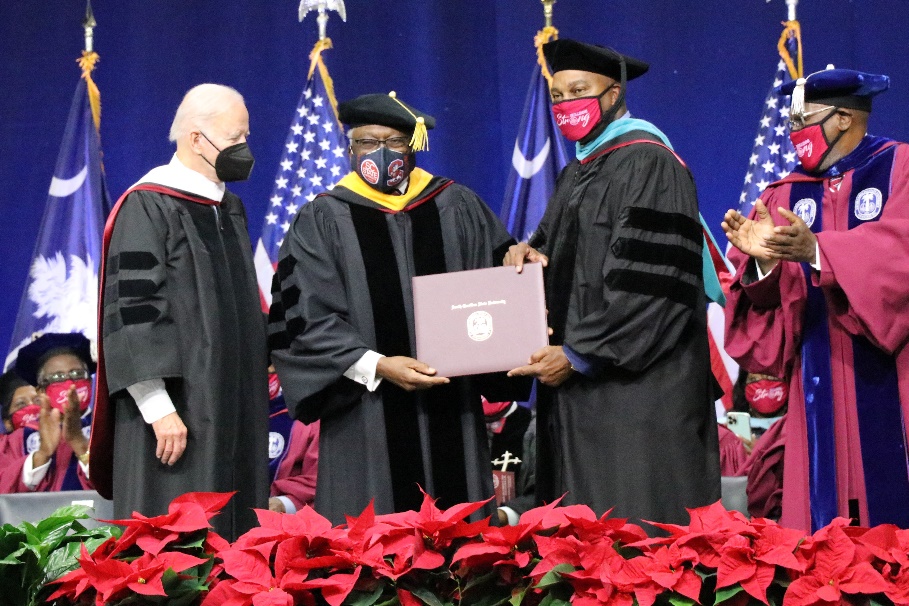 Friday also was a special day for the man who convinced Biden to speak at Friday’s commencement, Congressman James E. Clyburn, the Majority Whip in the House of Representatives.

Clyburn, a Bulldog alumnus, originally was slated to deliver the commencement address at the invitation of SC State Interim President Alexander Conyers. When Clyburn completed his degree in December 1961, then-SC State College did not offer a fall semester graduation ceremony. He received his credential by mail and never walked across the stage.

That changed on Friday. The congressman left the platform to join the Class of 2021 on the floor and marched back up the steps to receive his degree with Biden there to congratulate him.

Clyburn, too, offered advice to the 128 newest graduates of SC State. He told the class he lost his first three races for Congress, and a friend asked what he planned to do next, citing the “three strikes you’re out” adage inspired by baseball.

“I said to my friend, ‘That’s a baseball rule, and nobody should lead their lives by baseball rules,’” Clyburn said. “I want to say to you graduates, no matter how many times you attempt, you keep trying until you get it right.”