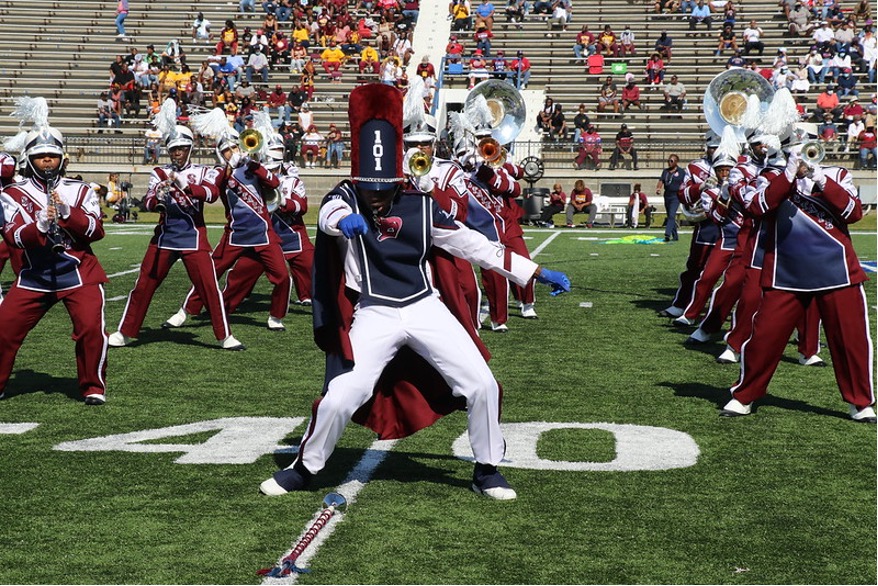 The Marching 101 Band performs at halftime during the SC State home opener in 2021.

ORANGEBURG, S.C. – South Carolina State University’s high-stepping musical powerhouse will be featured in a performance of a lifetime this weekend.

On Sunday, Sept. 25, the Marching 101 Band will perform at Lucas Oil Stadium with an electrifying halftime performance that will awe a crowd of thousands of spectators and fans from Indianapolis and across the nation as the Colts take on the Kansas City Chiefs.

“This is an exciting moment for the band program and the university as we are honored to showcase this prestigious ensemble on yet, another national stage,” said Dr. Patrick Moore, SC State director of bands.  “We hope that everyone will tune in and watch our dynamic performance. Go Bulldogs!”

Also at Tuesday’s Convocation, the Marching 101 had the honor of performing for Vice President Kamala Harris, who was the event’s featured speaker. The band also performed at the Inauguration of President Joe Biden and Harris on Jan. 21, 2021. Members played again for Biden when he delivered the address to SC State graduates at December’s Fall Commencement on the SC State campus.

For more than 100 years, the Marching 101 Band has performed for sellout crowds across the nation.

The band has performed at such national football stadiums as the Mercedes Benz Stadium at the halftime show of the Atlanta Falcons. In December, the Marching 101 played at that same stadium for the Cricket Celebration Bowl, cheering on the Bulldogs as they captured the National HBCU Football Championship.

“We appreciate the opportunity to offer our students this exciting, perhaps once in a lifetime, experience”, said Dr. M. Evelyn Fields, acting dean of the College of Education, Humanities and Social Sciences. “We know they will represent the university well as they always do, and we are looking forward to an outstanding performance.”