“The South Carolina State University family is honored and grateful to host President Biden when he addresses our graduates as they set a course for their futures,” Interim SC State President Alexander Conyers said. “Our students will no doubt remember his words for the rest of their lives. This is indeed a privilege for all here at SC State.

“We extend our heartfelt thanks to President Biden and Congressman James E. Clyburn for making this special occasion an unforgettable moment in the university’s history,” Conyers said.

Congressman Clyburn had been scheduled to be the keynote speaker, but he invited President Biden to deliver the commencement address in his stead, as the congressman will be receiving his own degree during the ceremony.

“I am pleased to welcome President Biden back to my alma mater. The last time he was on this campus, he came to win the hearts and minds of this community. This week he will return to share with the newest graduates of South Carolina State what he is doing for them, for their families, and their community to ensure that they have access to America’s greatness,” said Congressman Clyburn. “It will be a tremendous honor to share the stage with President Biden at this institution that means so much to me as I mark 60 years since I earned the degree that set me on the path to where I am today.”

Congressman Clyburn will march with the class of 2021. He did not march to receive his degree from SC State College in 1961. SC State did not conduct December ceremonies in that era, so he received his credential by mail.

Please note that commencement seating will be limited to students, faculty and invited guests in keeping with COVID-19 social distancing capacity in Smith Hammond Middleton. Face coverings will be required for entry and must be worn at all times inside the arena. Details about news media credentials will be forthcoming.

President Biden represented Delaware for 36 years in the U.S. Senate before becoming the 47th Vice President of the United States. As President, Biden promises to restore America’s leadership and build our communities back better.

President Biden was born in Scranton, Pennsylvania, the first of four children of Catherine Eugenia Finnegan Biden and Joseph Robinette Biden, Sr. In 1953, the Biden family moved to Claymont, Delaware. President Biden graduated from the University of Delaware and Syracuse Law School and served on the New Castle County Council.

At age 29, President Biden became one of the youngest people ever elected to the United States Senate.

As a Senator from Delaware for 36 years, President Biden established himself as a leader in facing some of our nation’s most important domestic and international challenges. As Chairman or Ranking Member of the Senate Judiciary Committee for 16 years, Biden is widely recognized for his work writing and spearheading the Violence Against Women Act — the landmark legislation that strengthens penalties for violence against women, creates unprecedented resources for survivors of assault, and changes the national dialogue on domestic and sexual assault.

As Chairman or Ranking Member of the Senate Foreign Relations Committee for 12 years, Biden played a pivotal role in shaping U.S. foreign policy. He was at the forefront of issues and legislation related to terrorism, weapons of mass destruction, post-Cold War Europe, the Middle East, Southwest Asia, and ending apartheid.

As Vice President, Biden continued his leadership on important issues facing the nation and represented our country abroad. Vice President Biden convened sessions of the President’s Cabinet, led interagency efforts, and worked with Congress in his fight to raise the living standards of middle-class Americans, reduce gun violence, address violence against women, and end cancer as we know it.

Biden helped President Obama pass and then oversaw the implementation of the Recovery Act — the biggest economic recovery plan in the history of the nation and our biggest and strongest commitment to clean energy. The President’s plan prevented another Great Depression, created and saved millions of jobs, and led to 75 uninterrupted months of job growth by the end of the administration. And Biden did it all with less than 1% in waste, abuse, or fraud — the most efficient government program in our country’s history.

President Obama and Vice President Biden also secured the passage of the Affordable Care Act, which reduced the number of uninsured Americans by 20 million by the time they left office and banned insurance companies from denying coverage due to pre-existing conditions.

He served as the point person for U.S. diplomacy throughout the Western Hemisphere, strengthened relationships with our allies both in Europe and the Asia-Pacific, and led the effort to bring 150,000 troops home from Iraq.

In a ceremony at the White House, President Obama awarded Biden the Presidential Medal of Freedom with Distinction — the nation’s highest civilian honor.

After leaving the White House, the Bidens continued their efforts to expand opportunity for every American with the creation of the Biden Foundation, the Biden Cancer Initiative, the Penn Biden Center for Diplomacy and Global Engagement, and the Biden Institute at the University of Delaware.

On April 25, 2019, Biden announced his candidacy for President of the United States. Biden’s candidacy was built from the beginning around 3 pillars: the battle for the soul of our nation, the need to rebuild our middle class — the backbone of our country, and a call for unity, to act as One America. It was a message that would only gain more resonance in 2020 as we confront a pandemic, an economic crisis, urgent calls for racial justice, and the existential threat of climate change. 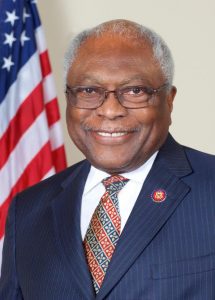 Congressman Clyburn is the Majority Whip and the third-ranking Democrat in the United States House of Representatives. He previously served in the post from 2007 to 2011 and served as Assistant Democratic Leader from 2011 to 2019.

When he came to Congress in 1993 to represent South Carolina’s sixth congressional district, Congressman Clyburn was elected co-president of his freshman class and quickly rose through leadership ranks. He was subsequently elected Chairman of the Congressional Black Caucus, Vice Chair, and later Chair, of the House Democratic Caucus.

Clyburn’s humble beginnings in Sumter, South Carolina as the eldest son of an activist, fundamentalist minister and an independent, civic-minded beautician grounded him securely in family, faith and public service. His memoir, “Blessed Experiences: Genuinely Southern, Proudly Black,” was published in 2015, and has been described ‎as a primer that should be read by every student interested in pursuing a career in public service.

Clyburn and his late wife, Dr. Emily England Clyburn, met as students at South Carolina State and were married for 58 years before her death in September 2019. The marriage brought three daughters, Mignon Clyburn, Jennifer Reed, and Angela Clyburn, as well as four grandchildren.

The Clyburn family has generously supported SC State over the years, including the establishment of the Dr. Emily England Clyburn Honors College Scholarships.

SC State Board of Trustees to meet Thursday in hybrid session