Such was the experience of Columbia-area resident Amari Cook, who will be a freshman this fall at South Carolina State University. 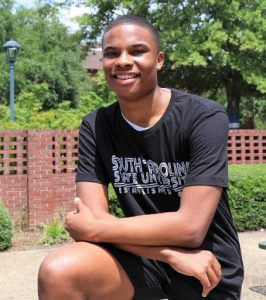 Cook crossed the stage at Richland County’s Westwood High School in Blythewood the morning of June 10 and immediately headed south to the SC State campus in Orangeburg for Bulldog Ready, an event intended to help first-time freshmen complete the enrollment processes.

“It was just a good feeling to get that out of the way,” he said of his high school graduation. “It was a long four years – really a long 12 years. I’m just ready to be on my own, and Orangeburg isn’t too far from home.”

Cook said he had been looking forward to attending SC State since he visited the campus as a seventh-grader on a field trip.

“I’ve liked the campus ever since,” he said. “It’s an HBCU so I knew it was going to be fun. I know that homecoming will be fun. So, there’s no better place to be than SC State.”

He had considered going away to school, but a campus tour during Bulldog Ready confirmed his decision to enroll at SC State.

“Getting the tour just made it a lot better,” Cook said. “That pretty much put the icing on the cake.”

Having been a shooting guard on the Westwood basketball team, he hopes to play for the SC State Bulldogs, but academics will be first on his agenda as a freshman.

“I plan on getting my grades together and everything my freshman year and then in my sophomore year I want to walk on,” Cook said.

His major will be physical education, possibly toward an advanced degree in physical therapy.

“Honestly, I want to play pro ball one day, but I also want to be a physical therapist. I want to get into that training world, but basketball is where I really want to go.”